In 2019, founder and CEO of Promontory Financial Group Gene Ludwig gathered a bipartisan group of the nation’s foremost economic thinkers — academics and politicians, CEOs and former presidential advisors — to break with convention and candidly discuss the economic plight of low- and middle-income Americans. The Vanishing American Dream: A Frank Look at the Economic Realities Facing Middle- and Lower-Income Americans comes from their insights.

As America struggles to point its way out of the COVID-19 pandemic, we can’t lose sight of the economic problems that existed before the crisis. Even when the unemployment rate was near record lows and the stock market near record highs, the gap between low- and moderate-income Americans and their wealthier counterparts had become unconscionably wide. A future economic recovery presents an opportunity to address this deeper, troubling challenge and to rectify the economic injustice that threatens so many Americans.

The opportunity to rebuild our economy should inspire the most important conversations and ideas of our time. The dialogue captured in this book provides broad and experienced perspectives on inequality and policy shortcomings, along with examples of ideas that have successfully narrowed the wealth gap, from government investment to the role of the private sector. As we remap our economy, we have an opportunity to rebuild the American Dream for the long-term.
‍
Combining expertise with optimism, The Vanishing American Dream invites readers to take a seat at the table for a bracing look at the road back to widespread opportunity, security, and prosperity. 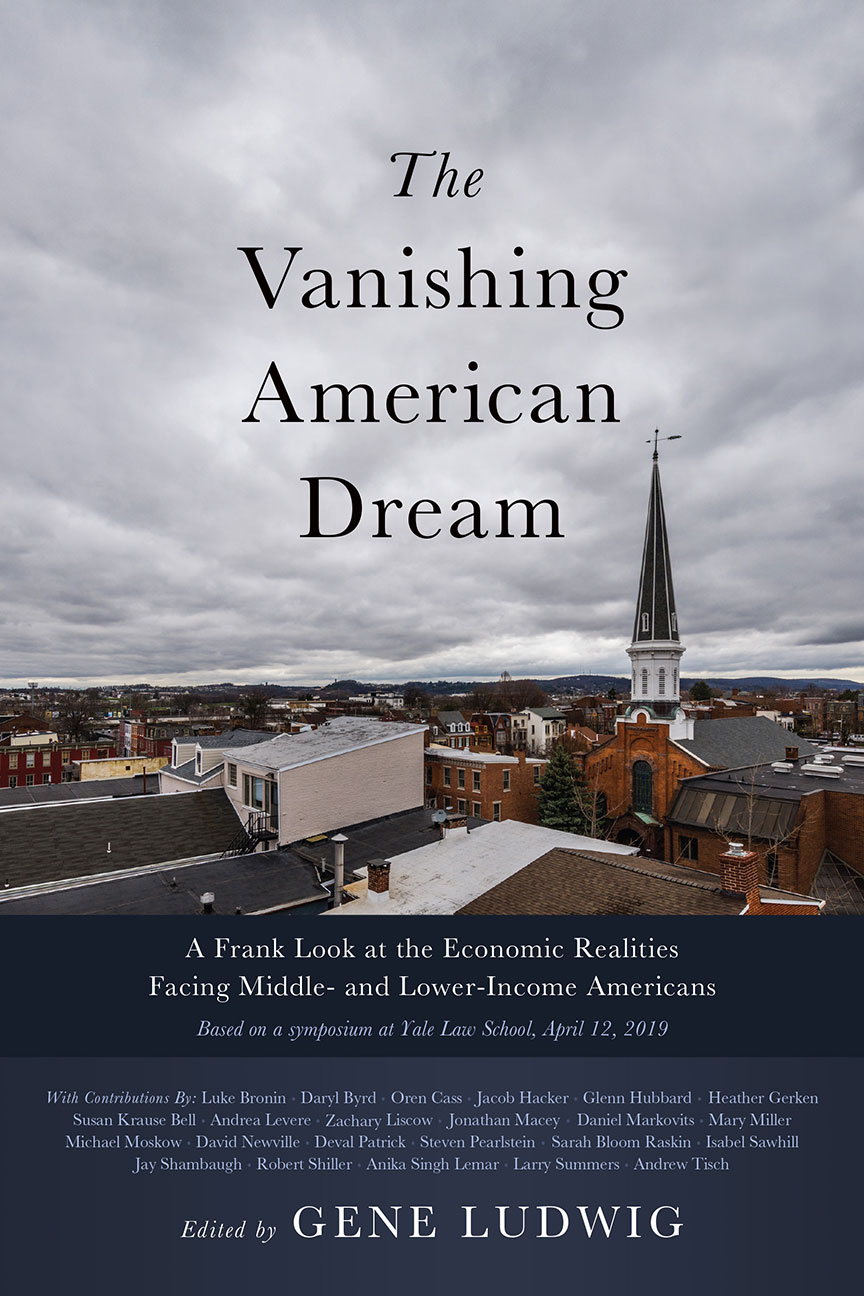 Order your copy today from these booksellers:

“In this book, Gene nails the inequality equation by compiling thoughtful, credentialed solutions to address our country’s pervasive economic problems. Gene and his cohorts advance ideas that are pragmatic, doable, and capable of building a broad, bipartisan consensus. As Gene himself might say, ‘Let’s get on with it to get it done.’”

“The Vanishing American Dream shines a bright light on how crucial it is that we find a way to achieve more broadly shared opportunity and hope and offers strategies that with a modicum of political comity should be achievable. The challenge ahead is for business and political decision makers to take this message to heart.”

Former Secretary of the Treasury

“In tracing the economic decline of vibrant industrial towns, Gene Ludwig asks the hard questions about technology, globalization, the role of government, trade, our educational system, and corporations. He and the extraordinary group of assembled experts force us, with data and insightful analysis, to confront the inequality of our system. But, they also offer solutions at the local level that every businessperson, politician, and policymaker should consider in building a more prosperous future for all Americans.”

Former Chair of the SEC

“Gene Ludwig’s insightful new book raises timely questions that reveal inconvenient truths about an economic system that is increasingly leaving entire communities behind. The fragile financial foothold of so many — especially Black and Latinx — Americans should be concerning to all given what it portends for an interconnected economy based on notions of economic fairness and equal opportunity. The Vanishing American Dream makes a compelling case for policymakers to reexamine traditional analyses of economic indicators that cloud our understanding of the troubling realities facing middle- and lower-income families across our nation today.”

“Gene Ludwig’s thoughtfully edited volume takes us closer to bipartisan consensus and solutions. With contributions from conservative thought leaders, academics, journalists, former Democratic governors, and others, The Vanishing American Dream outlines the problem and reaches consensus across ideological disagreements: Our economy is not working for a vast portion of the population. From that important foundation, the volume offers smart practical solutions for the future of work and our economy.”

“Gene Ludwig’s book is very much worth reading. The issues raised in the book are timely and important. To address the problems the book so clearly highlights, it’s my view that income growth and inequality for low- and moderate-income Americans can only be solved by strong GDP growth and a dynamic market economy. The history of other programs, however well-meaning, are much less effective, if at all.”

Former Chair of the Federal Reserve of the United States

“This vital book has gathered the best minds to seek answers — both causes and remedies. For those who care, this is urgent required reading.”

“This book is a call to arms. We must refocus to ensure the American Dream is available to future generations by creating more collaborations, more public-private partnerships, and investing in our infrastructure to get the job done.”

“A highly readable action guide to doing the always unfinished work of forming a more perfect union and should be widely read.”

True Rate of Unemployment by State

Select any state or percentage to see the most recent True Rate of Unemployment.

Stay up to date on the latest news from LISEP, and receive an exclusive newsletter when unemployment and earnings numbers are published.

Thank you!
You’ve signed up to receive updates from LISEP.
Oops! Something went wrong.
We’re looking into it.